Can't really say I'm a newbie, but I haven't grown carnivorous plants in a long time and I want to return to it. So any advice would be appreciated.

A bit of background. In the past I did successfully grow a small Nepenthes, a VFT, dozens of little Drosera in a small pot, and a Sarracenia Purpurea, before killing them in various fashion over the years. To be fair, I was still in HS or Uni at the time. The Drosera I killed when I removed the glass it was in to allow it to ventilate - I didn't know then about the need to adjust to humidity. The VFT and Sarracenia I'd had for some 5 years until I left the terrarium outside, where it promptly overheated and died. I don't remember how I killed the Nepenthes.

I used only tap water back then, so none of them should have survived. But I was lucky. The tap water in Ottawa is very soft (30 ppm) and I placed them in fully enclosed terrariums meaning that I only watered them maybe once every couple months.

So, now, some 10 years later, I've just bought two new plants, a Sarracenia 'Scarlet Belle" (from a grower in Gatineau), and a Cephalotus (thank you VarunA). Each are their original pots, in their own self-contained cookie jar. I've added little muffin fans to each jar to provide air circulation. Current humidity inside the jar fluctuates between 75-90% (my room humidity is around 30-35%). The Sarracenia I have sitting in water, the Cephalotus is sitting on pebbles with water just up to the bottom of the pot. Both are on a North-East windowsill with filtered morning light in the winter/spring, but shaded during the summer. As a result, I've decided to supplement it with artificial light from a little seedling kit. I'm using the T-4 5600 K florescent light that came with the kit - spectrum is unknown. I set it on a timer for 7 hours starting at 11 am to 6 pm. Internal terrarium temperature seems to be fixed at around 24 degrees even when the light is on, though I wonder what it'll be come summer. The Cephalotus is in the same cookie jar I used to grow the Sarracenia Purpurea and VFT years ago. Placing it next to the windowsill was sufficient to trigger dormancy and flowering in the S. Purpurea, but I'm unsure whether this will happen now to the S. 'Scarlet Belle' given that I've incorporated artificial lighting. I really want it to flower.

Of course, I use distilled water now.

In the future, I want to add a Utricularia that blooms year-round, and some kind of medium-height funnel-shaped Sarracenia, if possible. 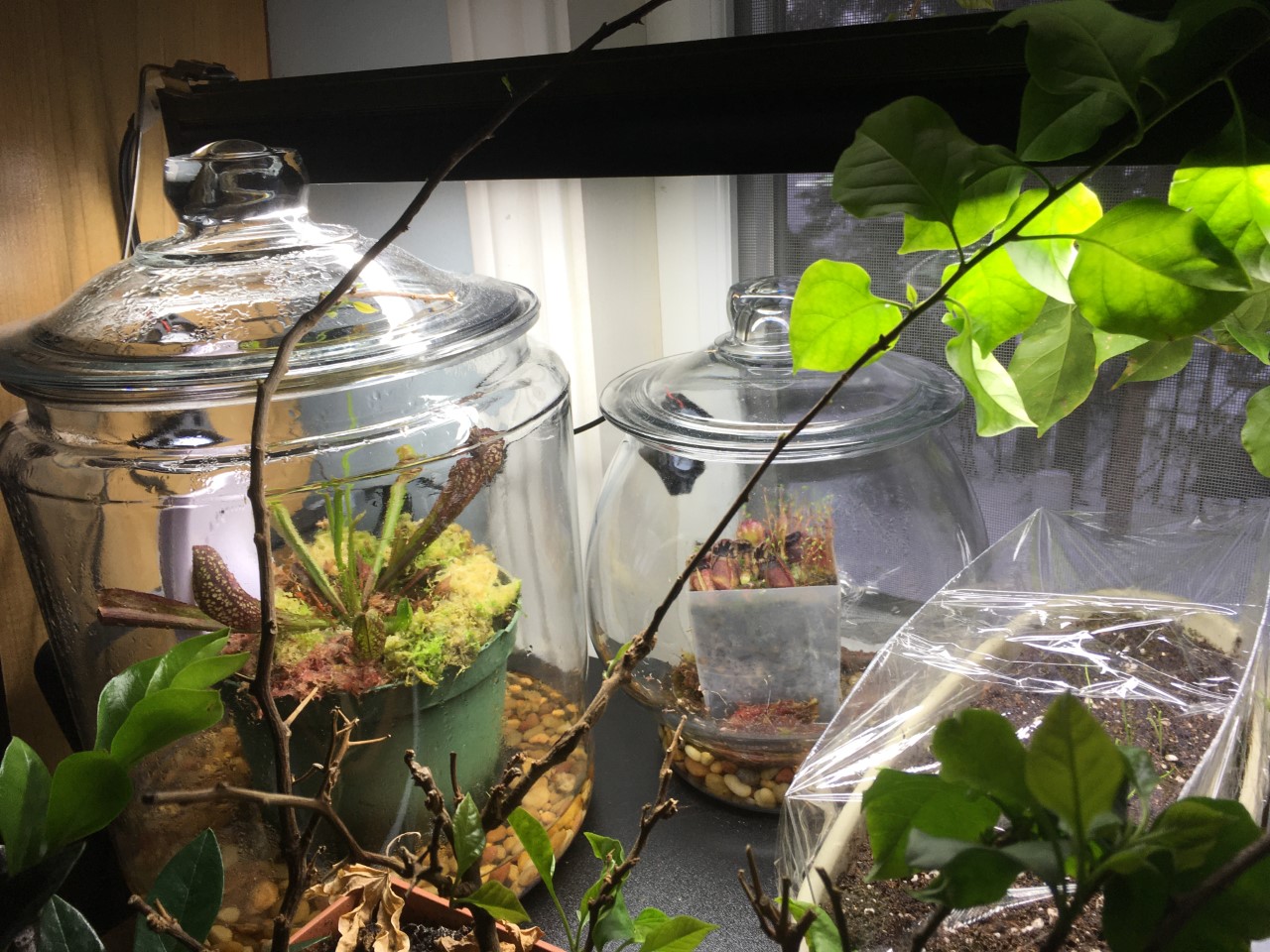 In my case it is a little different because it is not closed but my N. Mirabilis didn't like it to lose so much moisture when it was put it on windowsill.